We are having our annual charity tea party today June 7th.

This year it is in aid of RAWR - The Rural Animal Welfare Group, a charity benefitting animal welfare.

This is a great, local group, which we are happy to support with our annual tea party for charity, where all the income on the day goes directly to the chosen group.

At the same time we are celebrating coming of age in our 21st year of running The Ewe, now in Glengarriff after the first ten years on the Mizen peninsula/

RAWR is a 100% volunteer-run, non-profit charity that believes in caring for all animals. The people involved give their time willingly to help RAWR achieve its goals to educate the community, to protect and enhance the welfare of all animals and to understand its influence on the habitat, shared by people and animals.

Despite the hurricane storm and gales and rain we are planning to re-open for the season this Saturday April 12th.

It is the 21st anniversary for The Ewe Experience - with ten of those eventful years at our previous location on the Mizen peninsula. So we have finally come of age.

As always there is a lot of new experiences for visitors to look forward to, including a woolly Mammoth (next to the dinosaur) on the Evolution Walk high up in the Valley of Eden.

This Winter has been harder than ever for damage in our garden. The fearful hurricane in February created havoc among both trees and sculptures- damaged trees are still succumbing. Last night our largest, most beautiful beech tree cracked and broke. Our youngest daughter had expressed the wish to be married underneath the old beauty, but alas..

After months of work repairing, renewing and creating new sculptures, the last two months have been a matter of chain sawing broken trees, clearing the debris and salvaging smashed sculptures. All in the middle of 120 days of continuing rain, sliding around on muddy hill sides like lopsided mountain goats, not always maintaining a goat like balance but skidding and falling.

Thinking of visiting the Ewe Experience?

Click here to view our informative Garden Guide which is also available for download as a convenient PDF file. 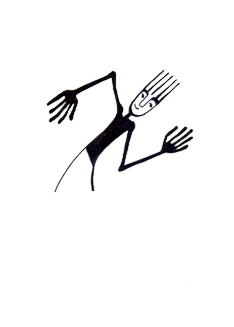